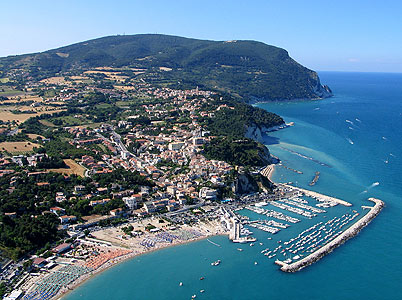 Numana Apartments, Numana was anciently known with the name of Humana. The legend tells that the mythological founder of the city was this Picenis Queen, a giant figure of a woman with half of the body in the shape of a snake and with wide wings on her back. The Queen threw fire balls on the seaside burning down a wood and on those cinders raised up the city of Humana (meaning human in Latin).

Numana is a central Adriatic coastal town, which lies at the southern foot of Monte Conero. 91.8% of the area falls within the Conero Regional Park.

The old town is often called “Numana alta” as it is on top of a cliff overlooking the sea and can be described almost in continuity with the settlement of Sirolo, while “Numana bassa” includes the area around the port. The beach of “Numana alta” comprises two bays formed close to the cliff: the Spiaggiola Beach and the friars and the beach of “Numana bassa” extending to the south of the port village of Marcelli. The inner part of the territory is mainly hilly and at the mouth of the Musone River, a wet area of significant natural and environmental value.

The Sanctuary of the Crucifix ( Santuario del Crocifisso) was built in 1968 to replace an earlier building, attributed to Pellegrino Tibaldi. Some of the frescoes of the vault, by the painter Andrea Lilli were retained and a crucifix in wood, which most likely was transported by ex-emperor Charlemagne as a gift for Pope Leo III, but due to a storm Emperor was forced to stay in the town and there abandoned it, after which it was found at sea after an earthquake. In contrast to the baroque Church of Saint John the Baptist, the modern church has a base with an octagonal spire and the main entrance is located before the Bishops Palace, seat of the town of Numana.
The Bishop’s Palace belonged to noble families in Rome and was then purchased by the bishops of Ancona as a summer residence. Today it is the city hall and hosts exhibitions.
The Arco di torre and aqueduct reveal evidence of Roman rule. Within walking distance of each other, the arc is the remnant of a tower (low after the earthquake of 1930) and was used as an outpost to prevent attacks by invaders in the Adriatic Sea, while the aqueduct, embellished a fountain, supplied water to the town until a few decades ago.

Marcelli, founded by the family of the same name, developed a tourist resort. Located at 4 km from the town of Numana, Marcelli was built on a swamp that was reclaimed by the lords of Numana and extends to the Musone River, the southern boundary of the municipality. There, is the main seaside resorts of the Riviera del Conero, campsites and holiday clubs.

Svarchi, located one mile west of the border with the comune of Sirolo. The town lies on a hill

Taunus, a tourist resort, is situated between Svarchi and Marcelli, and hosts a holiday village and is a residential area of the comune of Numana.