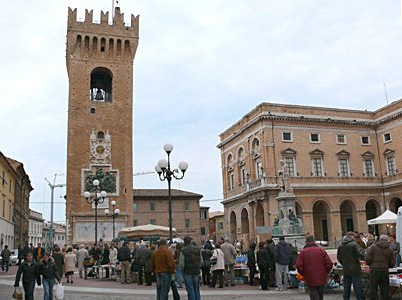 Recanati Holiday, Recanati is a town and comune in the Province of Macerata, Marche region of Italy. Recanati was founded around 1150 AD from three pre-existing castles. In 1290 it proclaimed itself an independent republic and, in the 15th century, was famous for its international fair. In the March 1798 it was conquered by Napoleon Bonaparte.

It is the hometown of tenor Beniamino Gigli and poet Giacomo Leopardi, which is why the town is known to some as “the city of poetry”. It contains the Teatro Persiani named after the composer of operas in the first part of the 19th Century, Giuseppe Persiani, who was born in the town in 1799.

Church of Santa Maria di Castelnuovo (12th century). It has a portal with a Byzantine style lunette, signed and dated 1253, depicting the Madonna Enthroned with Sts. Michael and Gabriel. The interior has a fresco by Pietro di Domenico da Montepulciano
Montefiore Castle, dating to the late Middle Ages. It has a polygonal plan with a high tower with merlons.
Church and cloister of Sant’Agostino (13th century), remade one century later together with the cathedral. In has a portal in Istrian stone by Giuliano da Maiano. The interior was remade in the 18th century under design by Ferdinando Galli da Bibbiena, with canvasses by Pomarancio, Pier Simone Fanelli, Felice Damiani.
Carabinieri barracks (14th century)
Church of St. Vitus, built over a pre-existing Romanesque-Byzantine edifice. It was given the current appearance in the mid-17th century, only the apse and the bell tower remaining of the former structure. The façade was remade after an earthquake in 1741 according to a design by Luigi Vanvitelli. Artworks in the interior include canvasses by Pomarancio, Fanelli, Felice Damiano da Gubbio (1582), Giuseppe Valeriani (1550) and Paolo de Matteis (1727).
Co-Cathedral of St. Flavian (14th century), with the annexed Bishop’s Palace and the Diocesan Museum. Pope Gregory XII is buried here.
Church of San Domenico (15th century), with a 1481 portal by Giuliano da Maiano. It houses the Glory of St. Vincent Ferrer by Lorenzo Lotto.
Church of San Pietrino (14th century), with a 18th century façade attributed to Vanvitelli.
Church of Madonna delle Grazie (1465)
Palazzo Venieri, designed by Giuliano da Maiano.
Palazzo Mazzagalli, designed by Giuliano da Maiano or Luciano Laurana.
Neolithic necropolises of Fontenoce and Cava Kock (4th millennium BC).
Town Museum of Villa Colloredo Mels, housing, among the other, Lorenzo Lotto’s Recanati Polyptych.

The city of Recanati had a fairly large Jewish population for hundreds of years. Among the scholars produced by the city were Rabbi Menachem Recanati (A.D. 1223-1290) author of the Kabbalistic work The reasons of the Mitzvot. He was a student of Rabbi Elazar Rokeiach (1165–1238) from Worms, Germany who was one of the Chassidei Ashkenaz, a group of German pietists. His work, Sefer HaRokeiach, is a guide to ethics and halacha. wrote a mystical commentary on the Torah. Rabbi Elazar Rokeiach was also the teacher of Nachmanides, whom Rabbi Recanati quotes frequently in his work. Last names have been derived and changed to Recanati, i.e. Agostino Recanati