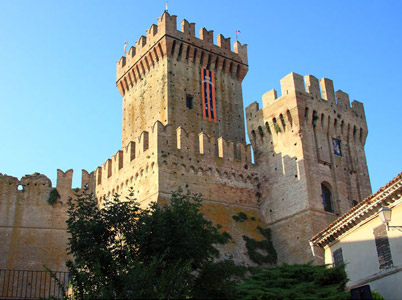 Offagna Apartments, The town stands around its ancient fortress, on top of a hill. It is 15 km from the center of Ancona and is easily reached from the south of Ancona ‘ A14 .
The history of this country do not have many references to the Roman or pre-Roman period.

The first information we have, when several Germanic nobility shall be granted by the archbishop of the region Marche Ravenna in the late Middle Ages . Around the twelfth – fifteenth century its history was common to that of Osimo . In 1445 he was given a final interference to the city of Ancona behind the behest of Pope Eugenius IV . Under jurisdiction of Ancona Offagna became one of about twenty castles of Ancona and therefore between 1454 and 1456 was built the present castle, with the important task of defending the border of the river Aspio . After 1532 , the date that marks the end of the Republic Anconitana , was part of in a stable state of the Church , to the unification of ‘ Italy . Despite the few historical reliefs the bill of works by some noble palaces, but also the perfect preservation, attest to a significant importance.
The fortress was built in the country 1454 and after many hours restorations looks quite healthy. The set has a square plan with corner tower and a male center. Another interesting monument is the house Montegallo with close to a building of 1500 which brings decorating Nicholas Pomarancio . The villa built on a project of Andrea Vici door decorations in the style of Bibbiena .

The economy is based on the cultivation of the vine and its consequent production of wine, grain and forage are abundant. There is no shortage of small package and metalworking industries.