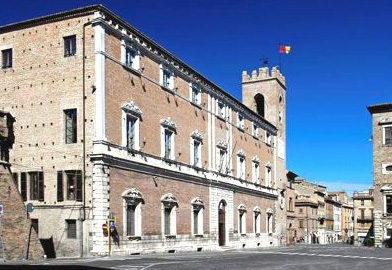 Osimo Apartments, Entrenched on a hill rising 265 meters above sea-level, surrounded by the pleasant countryside of rural Marche, lies the town of Osimo, near the Conero Riviera and only 70 km from the Sibilline mountains. The lay-out of the town, were it to be traced, would look like a gigantic left footprint, as a reminder of the tracks left by the numerous populations of ancient times that passed through this territory in succession. Its old name, Vetus Auximum , naturally implies that the history of the town spans many thousands of years, going as far back as pre-historic times. Then came the peoples known as the Picenes, the Graeco-Sicilians and more,from the Celts to the Romans. It was the latter who, from the 3rd century B.C. onwards, elevated the village to a more glorious status as, first, a Municipium and later, a Colonia; subsequently, Roman builders endowed the town with those sturdy walls (174-175 B.C.) which earned it its fame as an impregnable city. From the Writings of Procopius of Caesarea it emerged that Osimo distinguished itself in the Gothic-Byzantine war as a promoter and defender of the Christian faith; in fact, in the year 304 its first martyrs were sacrificed.
A free municipality in the Middle Ages, the town later saw alternating periods of domination under the various Signories of the time to finally remain under Papal rule, except for brief interludes, until the Unification of Italy.
The spiritual itinerary begins with the Chiesa di San Marco Evangelista, ready to welcome the visitor who enters the town from the Porta Vaccaro gate, the Eastern entrance. Previously built as a convent for Augustine nuns in the 14th century, the complex was modified in the 15th century by Dominican friars. The ornate, Baroque, single-nave interior provides a rich backdrop for a solemn altar piece portraying the Madonna of the Rosary with Saint Dominic and Saint Catherine of Siena by Guercino. Continuing on towards the Piazza del Comune, which was the forum of Roman times, the next stop is the Basilica-Santuario di San Giuseppe da Copertino, dedicated to St. Joseph of Copertino. The church had originally been dedicated to Saint Francis of Assisi, built just eight years after his death. Only the exterior has maintained the austere simplicity of the original Romanesque style. The interior was profoundly altered in the late 18th century, on occasion of the canonization of Father Joseph. It now has a single nave and boasts a wonderful Madonna with Child and Saints by Solario (1503). A pilgrimage site for devotees of the saint of flights, the small rooms where he spent the last years of his life can also be visited and his relics seen in the Crypt where they are preserved.
An additional itinerary that is both interesting and fascinating is the tour through the underground passageways which start at the basement of the convent refectory and continue through the caves known as the Grotte del Cantinone, a vast underground series of rooms and passageways, carved out of the sandstone, which contain a number of bas-reliefs of religious content.
Moving towards the highest point of the town, to Gomero hill where the very first primitive settlement was built, the view is breathtaking. Of the buildings gracefully flanking the lovely Piazzetta del Duomo the one which stands out in its splendor is the Cattedrale di San Leopardo, one of the most beautiful examples of regional Romanesque-Gothic architecture.
The earliest complex, which roughly corresponds to the central nave, was built in the 8th century on the site of a pre-existing church commissioned by Saint Leopard, first bishop of Osimo. The exterior is embellished with a large rose window, exquisite stone portals and a lovely lunette portraying a Madonna with Child, between the Saints and the Apostles. The triple-nave interior, spacious and austere, is conducive to contemplation and prayer.
The Crypt, built in 1191 by Mastro Filippo, is a masterpiece in itself, housing the majestically decorated sarcophagi of the ancient martyrs and saints of the town. Adjacent to the Cathedral, stand the Baptistery, with an impressive bronze baptismal font created by the Jacometti brothers in the first half of the 17th century, and the Diocesan Museum which holds a collection of paintings and sculptures as well as religious vestments and reliquaries. Of the latter, the most significant is that of the Holy Cross, fashioned by Bernini, which is said to contain a fragment of Our Lord’s Cross.